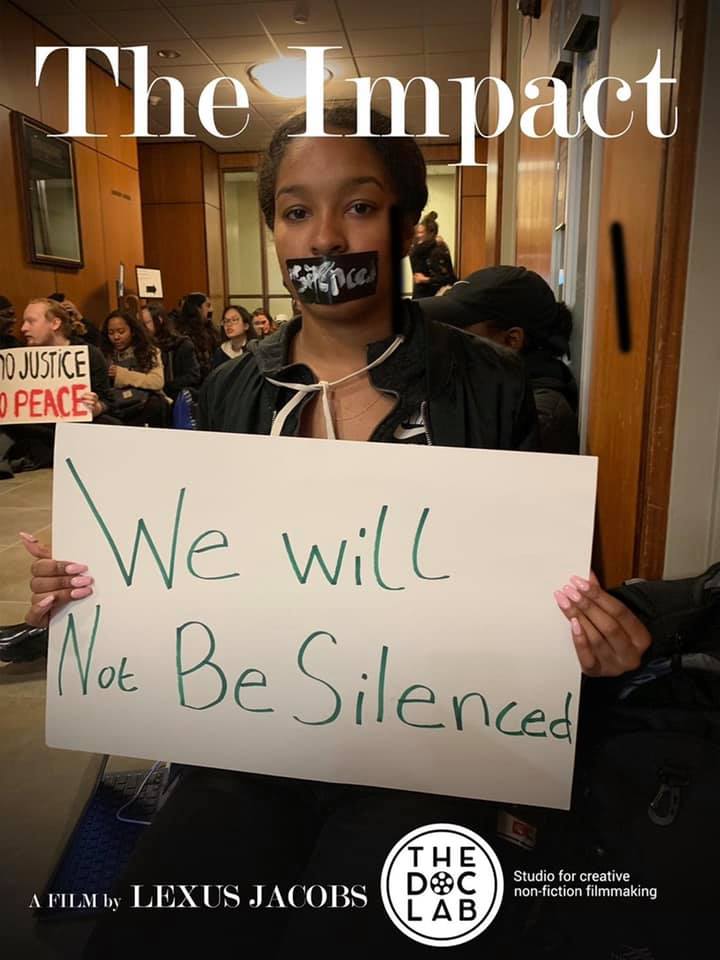 With a chilling orchestral soundtrack and trigger warning, The Impact’s opening sets the tone for an emotional and powerful short documentary that uncovers the realities of racial tensions on MSU’s campus. Made by Doc Lab alumna Lexus Jacobs while taking the minor’s capstone course, The Impact recounts several racially charged incidents that happened during her time at MSU. The documentary is primarily centered around a survey MSU Associate Professor Saleem Alhabash sent out to students in October of 2019. The survey contained offensive statements and racial slurs directed at Black people, and was emailed to randomly selected students. Although Alhabash’s intentions were to collect data on digital aggression, the effects of his survey created an unwelcoming environment that Black students said made them feel as if they did not have a place on campus. When searching for her capstone film topic, Jacobs knew she wanted to highlight something personal to her life as a Black woman, yet still relevant to the current social and political climate. She explains, “The main thing that inspired me to choose this topic would have to be that I was there to experience it all. I remember seeing the posts and screenshots of the questions in real-time before it became viral over social media.”

While still feeling raw and fresh emotions over the event covered by the film, Jacobs began production in December of 2019. She interviewed Alhabash and several MSU staff and students. In the interview, Alhabash says he is not someone who condones racially charged communication against people of color but is simply someone who is trying to research it. With help from editor Lauren Dawn, The Impact compellingly cuts between Alhabash, whose words defend his actions, and Spartans who are clearly hurt and upset over the incident. The staff and students discuss how this incident does not stand alone. It is rather an accumulation of racist occurrences on campus that continue to get swept under the rug and make them feel unwanted in the Spartan community.

Jacobs perfectly captures the passion and pain of her interview subjects as their words reflect messages the black community have been voicing long before the Black Lives Matter movement gained attention in the media this past summer. While explaining how she captured such strong interviews, Jacobs points out that sharing common ground with the interviewees and understanding their hardship was a key component of the important conversations she had. She says, “I found the most useful technique when conducting the interview was to treat it like a conversation with any other person. The most difficult one to conduct would have to be the one with Dantavious because I related to and felt everything he said.” Dantavious, a fellow student, expressed annoyance and exhaustion towards the countless events he can recall happening during his studies at MSU.

One of the most poignant aspects of the film is Jacobs’ narration and presence throughout. One scene in particular shows Jacobs reading out the unimaginably crude questions from the survey “which he and students designed and deployed” according to Inside Higher Ed, intercut with interview footage of Alhabash saying he takes pride in uncovering knowledge in a way that is socially aware. Although he apologizes for the hurt the survey caused, he does not seem to acknowledge the severity of what he wrote, a severity that is amplified by the way Jacobs reads the survey with anguish in her voice. By inserting herself into the story, Jacobs brings a personal and reflective element to the film that would not have been there if COVID-19 hadn’t created a major obstacle during production. As she describes her decision, she shares, “After watching the first few cuts of the film, me and my team felt there was a sense of guidance that was missing. Unfortunately, because of COVID-19, I was unable to get more in-person interviews that could have helped fill in the gaps. Therefore, because of my position as an African American student on the very campus where this occurred, I thought it would be appropriate for me to be the guiding voice in this.”

Jacob’s guiding voice carried a weight and power that the Boxfest Detroit Film Festival recognized. As a festival that strives to highlight women directors, Boxfest selected The Impact to be screened at the virtual festival in October and asked Jacobs to speak on their director’s panel. This accomplishment and opportunity meant a lot to Jacobs, both professionally and personally. She explains, “When I found out that my film was selected it was almost like a sense of confirmation that someone else understood the story I was trying to get out about the things that really go on and how students are really feeling on campus.” The Impact received a strong and emotional response from its viewers, which further validated that as a filmmaker, Jacobs was fostering an urgent conversation and reminding people of the importance of diversity in education. When asked to provide advice to fellow filmmakers, she states, “I also want students to know their voice matters and the amount of power they hold in speaking up.”

Jacobs graduated in May and has now started her own photography business, she plans to continue working on films while working full-time as a bank teller at a credit union. She has left her mark at MSU by highlighting the voices of it’s black community and will undoubtedly continue to do so with the powerful stories she will tell in the future. Jacobs shares, “In the end, I just wanted people who don’t go to MSU to really see what goes on behind the green and white walls. I want there to be an acknowledgement of the things that have been done but I also want there to be conversations had on the solutions. Then actually take action on them. I want any and all work I create to start a conversation, and I think I’ve done just that with The Impact.”

You can find Lexus Jacobs on her Instagram and Facebook and view her film The Impact by clicking here.

Mimi Anagli is a Senior at Michigan State University double majoring in Film Studies and Professional Writing with a minor in French. Along with writing for the doc lab, she is a staff writer for the feminist film publication agnés films. During her time in undergrad, Mimi has had the opportunity to attend the 72nd Cannes Film Festival and the 2019 Toronto International Film Festival, where she interned for The Hollywood Reporter. After graduation, Mimi plans to continue writing about women in film and pursue a career as a cinematographer.