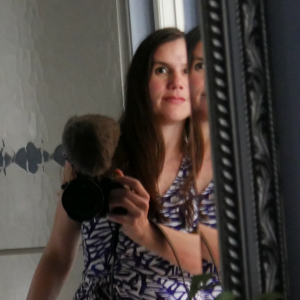 Alexandra Hidalgo is an award-winning Venezuelan filmmaker, theorist, and editor whose documentaries have been official selections at film festivals in 14 countries. The Weeping Season is her second feature as director and producer. Her short documentary Teta has been selected for 19 film festivals and won 8 awards. Alexandra is the co-founder and editor-in-chief of agnès films, a digital publication that supports the work of women and feminist filmmakers. She has spearheaded various activist campaigns toward increasing the number of women behind the camera. These campaigns have been featured on The Hollywood Reporter, IndieWire, NPR, and Women and Hollywood. Having received her PhD in Rhetoric and Composition with a concentration in film and video production from Purdue University, Alexandra is now an assistant professor and co-director of The Documentary Film Lab at Michigan State University. Her video book, Cámara Retórica: A Feminist Filmmaking Methodology for Rhetoric and Composition received the 2017 Computers and Composition Distinguished Book Award. Her academic video essays have been published in premiere peer-reviewed digital journals like Enculturation, Kairos, and Peitho.

This feature documentary tells the story of my father’s 1983 disappearance in the Venezuelan Amazon when I was six years old and of my search to not only find out what happened to him but to understand his life and legacy. Shot over 14 years in Venezuela, the US, Spain, and Portugal the film weaves the loss of a parent with the loss of a homeland, exploring the current economic and political crisis in Venezuela. We have received various grants for the film and are currently in production.


This short documentary tells the story of my journey nursing my youngest son, Santiago, for twenty-two months. Teta uses my narration and the footage shot by my husband to portray the ups and downs of nursing a baby as a working mother of two. As the film shows Santiago go from his first nursing session minutes after being born to his last as a walking and talking toddler, Teta illustrates the transcendent emotional bond created by nursing, not only between mother and child but between all members of the family. It has been the official selection at nineteen film festivals and received seven film festival awards.

This feature documentary showcases the lives of four immigrant women living in New York City, who transform their communities with their work. The film provides a personal and complex portrayal of immigration in contrast to the abstract and generalized representations often found in the mainstream media. It has been the official selection at eleven film festivals and seven universities, received five film festival awards, and been featured on multiple press outlets.


“Creating our Pasts Together: A Cultural Rhetorics Approach to Memoir.” Journal of Multimodal Rhetorics 2.1 (2018).

“A Feminist Approach to Social Media” (with Katie Grimes). Kairos: A Journal of Rhetoric, Technology, and Pedagogy 12.2 (2017).

Back to Faculty Page
Close Menu