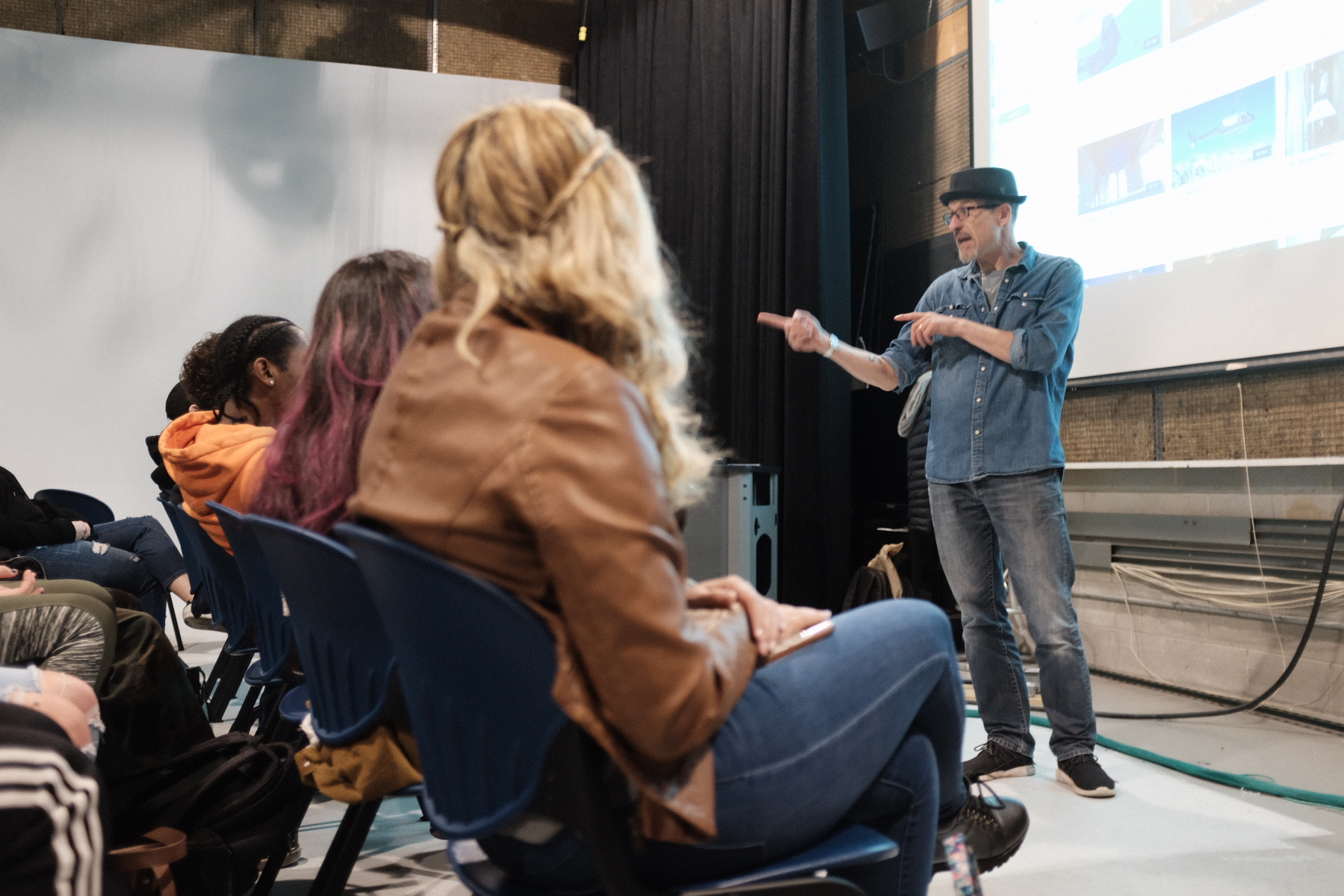 This past month, cinematographer Elia Lyssy came to Michigan State University to talk to film students on campus. Coordinated by John Valadez, the director of MSU’s Doc Lab, Lyssy spent three days giving talks and conducting workshops for different film classes. As a film student, I got the chance to attend his first talk through one of my classes. My goal in the future is to become a cinematographer, so I was really looking forward to hearing what insight Lyssy was going to share.

Having traveled the world filming for documentary, narrative, and commercial projects, Lyssy had countless crazy, funny, and inspiring stories to tell. Opening with a frightful memory of filming a snowboarder escape an avalanche in The First Descent, a documentary he worked on, Lyssy had us on the edge of our seats from the start. His ability to keep a classroom full of students engaged at 9 a.m. says it all. In his talk, Lyssy painted a picture of his career, starting from when he was a kid. Being the son of Swiss director Rolf Lyssy, Lyssy spent his childhood on film sets, passing the time with different departments and watching them work as a team. From then on, Lyssy knew he wanted to be a part of the family created on film sets. First dabbling in acting and quickly changing gears, Lyssy ended up falling in love with the camera and pursuing a career in cinematography.

One of the main aspects that drew him to film was the kind of connections that are built while on a film set. Lyssy talked about how the collaboration that’s seen on a film shoot is unlike any other kind of collaboration. With the intense pressure and unpredictable environments that characterize many film sets, strong bonds are inevitable. Film sets create the kind of bond that lasts a lifetime. Lyssy explained how even after not seeing someone for years, the bond remains. The moment you set eyes on someone you’ve worked with, all the memories come rushing back and it’s like it was yesterday.

I have made some of my strongest friendships through film, so everything Lyssy said really resonated with me. That is something unique about film that you don’t see in many other professions. With film, you get the chance to know people on a deeper level and explore creative visions to make a unified work of art. Unlike a nine to five at a desk, filmmaking is a job that carries through every aspect of your life, which can seem overwhelming, but with the passion and commitment, it’s immensely fulfilling.

Another element of Lyssy’s talk that stuck out to me was his global perspective on the film industry. Lyssy is originally from Zurich, Switzerland and has been living in Brooklyn, New York for the past two decades. Coming from Switzerland, where there are four national languages, German, French, Italian, and Romansh, Lyssy has always had a strong foundation in languages. He also picked up Spanish from a childhood friend and English from living in the States. This foundation in languages has brought him far in his career. Film is a universal thing, so being limited to one or two countries’ interpretation of cinema can be a setback when it comes to opportunities and appreciating other countries’ art. Lyssy’s point wasn’t to tell us to learn six languages but to be open to the global nature of the film industry. In whatever place a film may take you, it is important to make an effort to learn that places language and culture. Whether it’s figuring out how to say “Hello” or “Where is the restroom?”, the smallest indication that you are trying to learn the language and appreciate the culture will open global doors for you in the industry.

Having worked in the industry for quite some time, Lyssy had an endless amount of wisdom to share, which was sadly cut short by class hours. I left Lyssy’s talk feeling inspired and excited for the possibilities working as a cinematographer would create. My mind flooded with a million questions I wanted to ask him, but unfortunately, I wasn’t able to, due to the handful of other students whose minds were flooded with questions as well.

To my surprise, later that evening I got a message from Alexandra Hidalgo, the co-director of the MSU Doc Lab, asking if I wanted to have dinner with Lyssy, Professor Valadez and some other students the next day. Having worked with Alex for over a year now on her feminist film publication, agnés films, she knew that cinematography is something I’m hoping to pursue and thought it would be the perfect chance to get a better look inside the world of cinematography and make some connections. For the entirety of that day, I had been thinking back to all the insight Lyssy had to share and the questions I wished I had asked, so when I got the incredible news, I was beyond elated to get another chance to ask him questions and hear more about his job.

At the dinner, there were three other film students along with Lyssy and Professor Valadez. My unease about coming to the dinner not knowing anyone quickly vanished with everyone’s welcoming personalities. Throughout the night we talked about the projects we’re working on and our plans for the future. I was finally able to ask Lyssy more about cinematography and what it takes to pursue that path. Lyssy talked about how being in charge of the camera is all about intent in with every shot. Having started his career using film cameras that used reels, there was a different kind of pressure on cinematographers. Before the digital days, ten minutes of footage would cost thousands of dollars on film reels. That meant that whatever was filmed on that reel better have been usable or it was thousands of dollars down the drain. With that mindset, every shot that he captures carries a considerable amount of thought.

There was a moment in the conversation where Lyssy looked out the window and framed a hypothetical shot with the sidewalk and neon traffic lights in the background. Using the window as a frame within a frame, Lyssy described the glow of red and green reflecting off the shine of the wet concrete as the blur of cars sloshed by. The detail and depth he went into to describe such a seemingly simple setting was amazing. He saw a site that most would overlook and disregard and found the raw beauty in it. At that moment I saw that being a good cinematographer means being an aware and observational person, and taking all the beauty and charm you see in the world and using it to tell a story.

Working in the film industry, no matter the job, is full of risk and uncertainty. With more doors being shut than open, it’s an industry that has no clear recipe for success. I went into the dinner half hoping to find a cut and dry guide to becoming a good cinematographer. After three hours of captivating conversation with Lyssy, I left with the realization that there is no guide to follow. Every cinematographer has their own set of skills and their own style. What I did leave the dinner with was the certainty that with the right drive, passion, and openness to learning (and failing) you’ll eventually make it where you want to be.

Every word that Lyssy spoke was spoken with an immense amount of passion. From the first few minutes of his talk, it was evident that he loves what he does. Lyssy has a passion for the camera, a passion for storytelling, and a passion for life. He seems like the kind of person that approaches everything with full force ready to give it all his energy and absorb all the knowledge and experience it has to offer. As a student hoping to be in the position he is in one day, it was incredibly inspiring to see that. On the brink of entering the professional world, I have been searching to find the most practical and efficient way to pursue cinematography, which, as you can imagine, hasn’t been the easiest search. From Lyssy’s visit, I’ve learned that it’s not about being practical or efficient, it’s about approaching any opportunity, big or small, with as much passion and energy you have to offer.

Mimi is a Junior at Michigan State University double majoring in Film Studies and Professional Writing with a minor in French. Along with writing for agnés films, she works as a writer for MSU’s Alliance for African Partnership, as a film production lab assistant in MSU’s Film Production Lab, and as a social media specialist for MSU’s Documentary Lab. During her time in undergrad, Mimi has had the opportunity to attend the 72nd Cannes Film Festival and the 2019 Toronto International Film Festival, where she interned for The Hollywood Reporter. Mimi’s goal is to work for a publication when she graduates in the hopes to continue writing about women in film. She ultimately wants to become a cinematographer, working in documentary and narrative films that tell inspiring stories that promote social change.