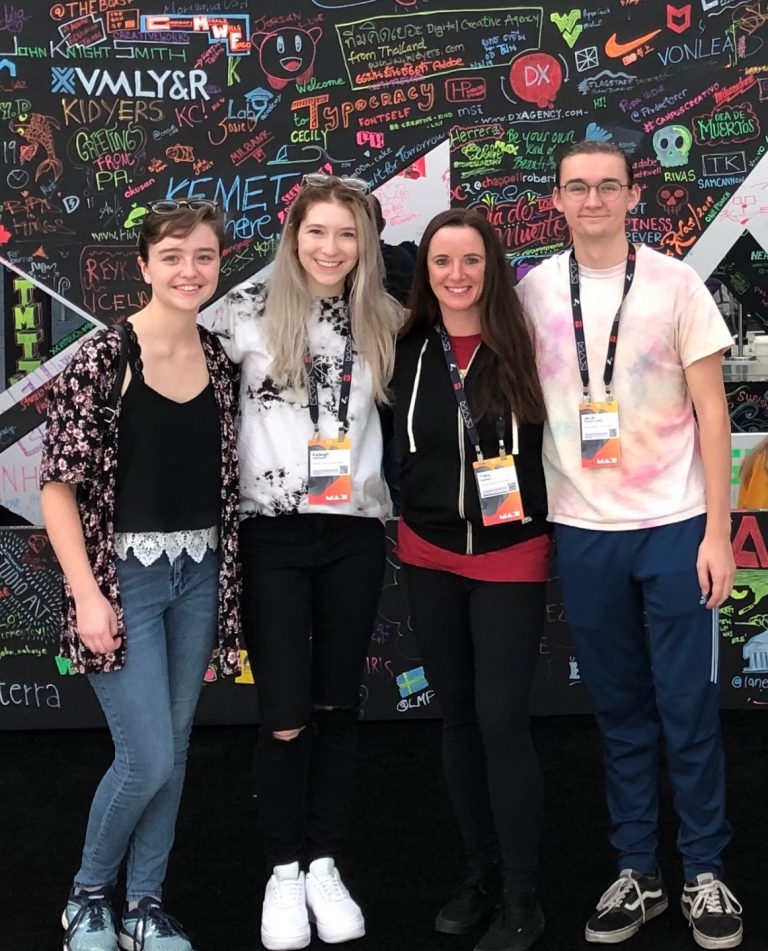 The following has been reposted from agnès films with the authors’ permission.

This November, I had the opportunity to go to the Adobe MAX conference, also known as “the conference to ruin all other conferences”. I went sponsored by my communications internship with the Michigan State University Innovation Center. Creatives from every industry all over the world gather at the Los Angeles Convention Center for this three-day learning party. And I do mean party. The conference was created by Adobe to teach creatives about the different Adobe applications. Attendees were able to sign up for classes with experts where they would learn new tricks to better utilize these programs.

The conference began Monday morning with the keynote presentations. The incredibly helpful and kind staff funneled all 14 thousand of us into West Hall, and as we turned the corner to enter, those around me literally gasped. I didn’t think that was a thing a collective groups of people actually did, but here we were. The hall was lit by six huge screens, all showing the vibrant Adobe MAX logo, and dozens of moving black lights. During the keynote, the Adobe team announced new products and features that were being released that day and in the near future. We’re going to be able to storyboard in Premiere! Move the icons in the media browser around and actually storyboard! If you can’t tell by all the exclamation points, I’m excited.

Between the keynotes and big events (more on those soon), I filled my days with as many sessions as possible. Premiere Pro is the Adobe app that, being a filmmaker, I use the most, so I tried to focus my sessions on this. I also took some on After Effects and Photoshop, as I’ve been trying to get better at creating title cards and graphics for my films and videos. The sessions gave me inspiration and new tips for my current and future projects I’m itching to try.

For the Tuesday morning keynote, Adobe brought in speakers and collaborators from diverse creative backgrounds, including M. Night Shyamalan, Billie Eilish, and the one and only Dave Grohl, who were all interviewed by an Adobe figurehead. M. Night Shyamalan is a film director perhaps best known for The Sixth Sense and Billie Eilish is a singer and songwriter who has some hits out right now. Now, having barely made the cut to be born in the 90s, I knew who Dave Grohl was, but in name only. The audience, however, being mostly people in their thirties and forties, went absolutely ham for Dave Grohl. He was the drummer for Nirvana and the lead singer for the Foo Fighters. 90% of the audience had their phones up as he walked out on stage, filming and taking photos of the man, myth, and legend, Dave Grohl, who, as I will once again remind you, I really didn’t know of outside of the name. The other interns and I were more excited for Billie Eilish, who, despite being incredibly popular right now, seemed to be basically unknown at this event.

Dave Grohl made me see just how young I was in comparison with most of the attendees. Nearly everyone I talked to was in a career, and many of them had been working for a long time or were repeat attendees. Being a student at the event seemed to be a rarity. Having this opportunity, being allowed the be at this conference with all these amazing professionals and having yet to start my own career outside of my experiences working as a student was an unbelievable opportunity that I am so grateful to have had.

Sneaks was by far my favorite event. It’s where Adobe engineers take the stage to preview some of the features they are working on for the different Adobe products that will hopefully make the lives of the users easier. They bring in a celebrity host, roll out carts full of free beer, and let the show begin. This year’s host was John Mulaney, who I’m a huge fan of. John Mulaney is a stand-up comedian whose Netflix special made my dad cry-laugh. Bringing a celebrity comedian was a good foil to the engineers and their code. Once, when the program froze up, John asked if the engineer tried closing the program and restarting it, as the engineer, the actual designer of the program, could do nothing but laugh and hope the program would work.

After Sneaks was MAX Bash. Think of the craziest party you’ve been to. Now add free food, an open bar, and about 10 thousand drunk people. Put that party in the Staples Center. Add a free concert from Vampire Weekend. It was absolutely overwhelming, yet all I wanted to do was run around and explore. Every corner we turned, there was another surprise. A wall where you could make a bowl of cereal. Swing sets. Another wall with holes where someone would stick their hand through and give you a toy (we got bubble guns). I’m seriously struggling to describe this, every corner we turned was another surprise, usually accompanied by a bar (seriously, there were so many bars). My coworker Kaileigh and I kept laughing as we passed the hordes of drunk people surrounding us, as our under 21-year-old selves walked around with cups of water.

Vampire Weekend played in the Staples Center. They are a rock band who have been active since 2006. Kaileigh and I got seats close to the stage. It was unlike any concert I’d ever been to. I know some of Vampire Weekend’s older stuff, so I was excited to see them. Most of the audience on the other hand, had no clue who they were. Additionally, the Staples Center can hold twice the amount of people who attended, so it was half empty. I can’t think of a time I’ve been at a huge concert like that and it wasn’t absolutely packed. And some people still chose to sit in the nosebleeds.

Even at the keynotes, nowhere else did the immensity of this conference hit me like at the concert. Just the sheer number of people, all there to learn and, at this moment at least, get absolutely plastered. Where else can you start talking to anyone and they all have amazing stories about the things they’ve made or designed? All of us here, gathered to learn and to share and to connect. I could feel change in the air. We were together learning about the future of filmmaking and design that will launch us into a new era of creativity. It is hard to imagine a world where an event like this exists without picturing the change that comes with it. By educating all these people in new technologies and tactics for creating, then sending them out into the world to share that knowledge, Adobe is putting itself at the forefront of a new creative wave.

That night, when my head hit the pillow, ears still ringing from the concert, I fell into a restful sleep, knowing I had one more day to make the most of MAX.

During the final day, I packed in as many sessions that would fit, trying to soak up all the last-minute knowledge I could. I took three sessions on After Effects, a program I knew I should learn, wanting to be a video professional. I took mostly introductory courses. I had opened the program before MAX, but was immediately frightened of it and shut it down. The courses I took taught me basic skills, such as animating text and shapes, that I’ll be able to use to make the final products of my work look better.

The session that surprised me the most was one I took titled Approaching Color with Intention. It was mostly for graphic designers and artists, but I figured I could get something out of it to apply to my own studies. The leader of this session was Tuna Bora, the production designer for Pearl, the first VR movie to be nominated for an Oscar. I had never heard of this film, nor did I know VR films were a thing. The way Tuna spoke about color, how the feelings they emit are personal and undefinable, and seeing how she applies this to her own artwork and filmmaking, it actually changed the way I think about color in film. Color, in addition to the cinematography, writing, acting, and everything else that goes into making a film, can be a powerful tool to lead the audience toward the message and the feelings you want to evoke. Another, scarier thought accompanied this. I’m going to have to learn how to color correct better.

By the end of Wednesday, I was so tired all I could do was go back to the hotel and crash, head spinning with new ideas and new tricks and techniques I couldn’t wait to try.

I was very fortunate to have had the opportunity to go to this event. With all the amazing people and workshops put on by Adobe, there is no doubt their conference had a high entrance fee. Because of this, not a lot of people are able to be there who would have benefitted from the opportunity to do so. It is unfortunate that there are so many people looking for opportunities like this who are barred from it because of the price barriers put in place by the corporations who host events like these. Besides everything I learned at the conference, I also realized how knowledge and technology can be used to let some people in and to keep some people out of content production. It’s a complex set of issues to navigate as I continue my way through the filmmaking industry.

This conference taught me a lot of tricks and gave me some new perspectives on my own work as a filmmaker, especially during the editing process. Editing is hard and sometimes grueling work, but I learned so many new things that will make the process smoother and make my work look better. It goes to show how much technology is changing, giving filmmaking a new shape. As various technologies evolve and become more accessible, a new generation of filmmakers can begin a wave of change where marginalized voices in the film world will be brought to the front, especially if they have access to conferences like this one and to the technologies they promote. It was amazing to be at the center of this technological evolution, and I am so looking forward to the ways in which the world will change when more marginalized people have access to it.

Kara has held a variety of jobs during her time at MSU. Currently she works for the MSU Innovation Center as a Communications/Videography Intern. She has also worked as a Consultant for the Writing Center and Videographer for the Multimodal Research Group. She frequently volunteers as Script Supervisor with Nain Rouge Films, a film company from her home town of Macomb, Michigan.