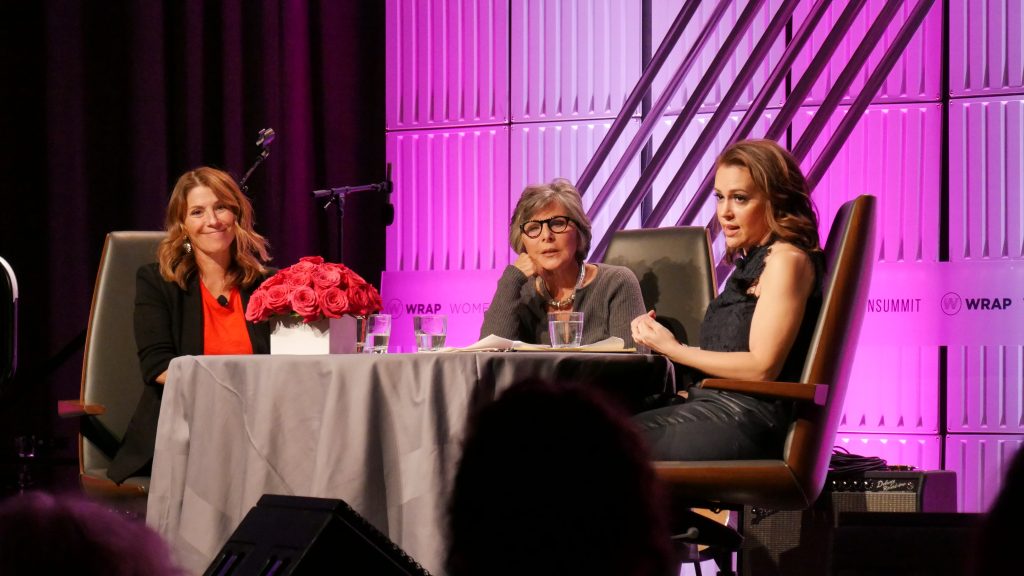 The following has been reposted from agnès films with the authors’ permission.

Melissa Silverstein, the founder and publisher of Women and Hollywood, has long supported the work of agnès films by featuring our social media campaigns in her publication. When she announced that Amazon Studios had generously agreed to sponsor 25 women to attend TheWrap’s Power Women Summit in Los Angeles on November 1 and 2, I knew this was a chance I could not miss. Not only would the women get to attend the Summit, they would also have the opportunity to spend time with each other and bond as a group. I poured my soul into the 800-word application essay. Then I waited. When I got an email from Melissa inviting me to join the Summit, I knew I’d gotten my golden ticket to the chocolate factory. Here are the most important strategies I learned at the event to help women strive for gender equality not just in the media industry, but in all aspects of our lives.

1. To achieve gender parity, we need a clear vision.

The Summit’s tagline was “The Road to 50/50 by 2020.” How can we transform the media industry so that in the near future 50% of those behind and in front of the camera are women? We have a long way to go. As Sharon Waxman, the CEO and editor-in-chief of TheWrap, said in her opening statement, women made up only 4% of directors in the last decade and speaking roles for men outnumbered those for women by 215%. 2020 is more than a date. It is also a metaphor for perfect vision. If we want to reach gender parity, we need to have a clear understanding of the current situation and a guiding strategy to reach our goals. When Waxman announced that this was the largest gathering of women in the industry ever assembled, we in the audience looked at each other in disbelief. How could it be that women had never come together like this before? Although Waxman had originally planned to have 1,000 women at the event, so many applied to attend that instead there were close to 1,500 women present. I have no doubt that if all of us in that room end up having clear vision and working together toward gender parity, we will reach it soon.

2. We need to vote so we can protect each other.

The Summit opened with a live recording of Nicole and Barbara Boxer’s The Boxer Podcast. They reminded us of how crucial this midterm election is in preventing the Trump Administration from doing even more damage to our country’s civil liberties and environment than it already has. They were joined by actor and activist Alyssa Milano, who explained that for her, voting is the way we protect each other. If we vote, we can protect our neighbor from losing her Affordable Care Act insurance and we can protect children from being inhumanely torn away from their parents when they arrive to the US seeking political asylum. We vote to protect those we love and those who can’t protect themselves.

3. It’s vital that we help pass more equitable laws and help women fight for their rights in court.

One of the most long-lasting and effective ways to create gender equality is to pass new laws that compel people and institutions to end modes of discrimination, which is why a number of lawyers and politicians attended and presented at the Summit. I met Laura Richards through the Women and Hollywood mentoring group. She worked as a criminal behavioral analyst at New Scotland Yard for years as head of their Homicide Prevention Unit before turning to TV and documentary as a way to reach millions of viewers with her message of working as a society to protect women and girls from violence. She combined her work in forensic and legal psychology with her media experience to pass strong legislation in England and Wales on stalking and coercive control. Laura founded the first national stalking advocacy service, Paladin, for victims of stalking around the world. She is now living in LA, working in the film industry, and lobbying for coercive control and a register for serial stalkers and domestic abusers to be introduced and implemented in the US. Once those laws pass, we need to make sure that women have access to strong representation in court. Tina Tchen, the co-founder of Time’s Up and the former Executive Director for the Obama Administration’s Council on Women and Girls, presented about her work creating the Time’s Up Legal Defense Fund so that those suing under the basis of gender equality who cannot afford a lawyer can have legal representation. They currently have 800 volunteer attorneys, have raised over 22 million dollars, and have provided representation for thousands of cases.

4. We need to ensure that institutions and corporations work toward reaching gender parity.

One of the great thrills of the conference was sharing an elevator ride with Anita Hill and telling her how important her legacy is to us emerging activists. During her presentation, Dr. Hill argued for creating change by not only holding institutions and corporations accountable, but also by helping them figure out how to overcome sexism. She explained that she begins by asking them to tell her three things: what they are already doing to improve gender equality, how they measure gender equality, and what else they plan to do to achieve it. By answering those questions and working with advising teams, corporations and institutions begin to figure out their strategy for change.

5. All gender equity initiatives are important. No matter how small.

One of the challenging aspects of fighting for gender equality is that the magnitude of the problem can make us feel helpless. However, as the Summit showed, we are not alone in this battle. No one needs to solve the problem on their own. The only way to reach working solutions is if millions of us address the issue from our particular perspectives. As Zoë Elton, the director of programming at Mill Valley Film Festival, pointed out during our Women and Hollywood meeting, small initiatives can have a huge, cumulative impact, so we should all feel empowered to work toward creating change. Her own initiative, Mind the Gap, was launched in 2015 as a way to amplify women’s voices in the industry. While most of the entertainment industry is unlikely to have 50% representation of women by 2020, Mill Valley is on track to achieve it.

6. To be an activist, you want to find the instances where joy happens in your life and hold on to them.

One of the most emotional moments of The Summit for me was Tarana Burke and Mira Sorvino’s “Making Sense of Trauma” session. Burke explained that she tried many of the popular healing techniques but none of them seemed to work for her. One day she realized that she had the tools to her own healing inside her. She has always worn bangles, and they jingle as she walks. When she would go pick up her daughter at school, her daughter would hear her from afar and would start telling everyone that her momma was there in the most excited of voices. Burke realized that the joy she felt at her daughter’s expressions of love was the key to healing if she remained mindful of that feeling and held on to it. She invited us to find our own moments of daily joy and use them to shield ourselves as we do the ongoing work of healing from our own traumas.

7. We have all experienced different levels of trauma, and we’ll benefit from understanding how trauma works and how we can heal it.

Louise Godbold, a trauma survivor, Harvey Weinstein silence breaker, and the Executive Director of Echo, provided an enlightening discussion on the ways in which sustained trauma can affect the brain. She explained that by understanding how trauma transforms our physical and mental reactions, we see that what can seem like irrational behavior from trauma victims is simply our body reacting exactly as it was designed to react in order to protect us. She explained that deep breathing, regular exercise, being surrounded by silence, and human touch can help calm and heal trauma victims.

Sherry Lansing was the first woman to head a major studio. She was the Chairperson and CEO of Paramount Pictures for 12 years, during which time the studio flourished artistically and financially. When asked how she got to such a groundbreaking position in the industry, she explained that key job opportunities had always been given to her by fellow women and that it was a woman who nurtured her talent and trained her as her successor for her first CEO job. Although she was the clear choice for the job by the time she was selected to lead a company, she knew that her boss had protected her years before she got to that point. Like a decades-long game of chess, we need to see talent and potential in the women around us and carefully cultivate it so they can thrive and become leaders who fight for a fairer world.

9. Women need to speak up for other women and amplify their voices.

As we pondered how to help and support fellow women behind the camera at the Women and Hollywood meeting, Kate Churchill, Senior Production Executive at Amazon Studios, explained that one way to help soften the blow of such discomfort is to ensure that other women’s voices are heard. When a woman speaks at a meeting and her statement is ignored or interrupted, fellow women can return the conversation to her ideas and repeatedly make sure that what she has to offer is heard and discussed.

Melissa Silverstein reminded us at our closing Women & Hollywood meeting that media work is crucial because the stories we watch and hear since childhood shape our sense of who we are and of how our world functions. The vast majority of those stories until now have been made by men and about men. If we can change the narrative to include at least 50% women-centric films made by women, we can dismantle sexism at its core.

So if you identify as a woman, pick up your camera, your pen, your mic. Pick up whatever instrument you choose and tell stories. And please, watch the stories that fellow women are telling so you can enjoy the world through their eyes and see your perspective reflected on the screen. It is such a rare treat, and there are 1,500 women and thousands more who couldn’t attend the Summit who are fighting to ensure that it will happen at least 50% of the time you engage with media.

If you would like to learn more about Alexandra, visit her profile.

Alexandra Hidalgo is an award-winning Venezuelan filmmaker, theorist, and editor whose documentaries have been official selections for film festivals in 14 countries and been screened at universities around the United States. Her videos and activist writing have been featured on The Hollywood Reporter, IndieWire, NPR, and Women and Hollywood. She is assistant professor of Writing, Rhetoric, and American Cultures and co-director of the Doc Lab at Michigan State University. Her video book Cámara Retórica: A Feminist Filmmaking Methodology for Rhetoric and Composition received the 2017 Computers and Composition Distinguished Book Award. Her academic video essays have been published in Enculturation, Kairos, Present Tense, and Peitho, among others. She is the co-founder and editor-in-chief of agnès films: supporting women and feminist filmmakers and of constellations: a cultural rhetorics publishing space.

Cross-Post: A Glimpse into My Time in Cannes